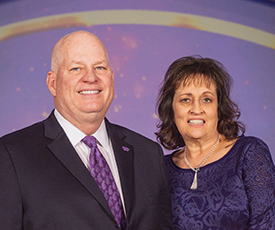 In 2018 Carl and Mary Ice made a transformative investment to create the first named college at Kansas State University: the Carl R. Ice College of Engineering. The naming honors Carl’s extraordinary professional accomplishment and the couple’s generous support of the college.

Carl and Mary have been strong advocates of Kansas State University and the College of Engineering making significant philanthropic investments for engineering faculty, students, facilities and the overall excellence of the college.

The Ices are native Kansans who currently live in Westlake, Texas. Carl built a distinguished career in the railroad industry attaining the position of president and CEO of BNSF Railway. Carl began his career in the railroad industry with Santa Fe Railway in 1979. He is a 1979 graduate in industrial engineering from the College of Engineering. Mary is a 1980 graduate of the College of Health and Human Sciences (formerly known as College of Human Ecology) and earned a master’s from the College of Education in 1988. She has worked as a substitute teacher and volunteer in the various communities they have lived.

Carl was inducted into the College of Engineering Hall of Fame in 2005 and in 2009 was named the College of Engineering Alumni Fellow. In 2018 he became the inaugural Steel Ring Honorary Member chosen by the organization. Together, Carl and Mary serve on the board of trustees of the KSU Foundation and as members of the Innovation and Inspiration Campaign steering committee. Carl is a member and the current chair of the KSU Foundation Board of Directors. The Ices also serve on the campaign steering committees for the College of Engineering and College of Health and Human Sciences. Carl is a past chair of the College of Engineering advisory council and a former member of the industrial and manufacturing systems engineering advisory council. He is chair of the Cotton Bowl Athletic Association Board of Directors, on the Association of American Railroads Board of Directors, leadership committee chairman for the Salvation Army North Texas Command Advisory Board and also serves on the Salvation Army’s National Advisory Board. Mary is a member of the Ahearn Fund advisory group and a former member of the president’s advisory committee on intercollegiate athletics. She is a former member of the K-State Alumni Association board of directors and also served as president of the College of Human Ecology alumni advisory board. In 2009, Mary and Carl received the Human Ecology Friend of the College award. K-State’s men’s and women’s basketball training facility was named in honor of the Ices in 2012, as well as the video boards at Bill Snyder Family Stadium. Mary and Carl Ice Hall, the latest addition to the College of Health and Human Sciences, was dedicated in 2013 in their honor.

Their daughter, Karen, is an attorney residing in Manhattan, Kansas. Their son, Marshall ’03, and their daughter-in-law, Megan ’04, are both K-State graduates.