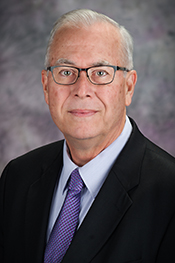 Clark has served as senior associate dean for the K-State Carl R. Ice College of Engineering since January 2009. As senior associate dean, Clark provides oversight of the undergraduate academic programs in the college including the offices of student recruitment; retention, diversity and inclusion; and student services. He also provides administrative oversight for assessment and program accreditation, scholarships, and faculty/staff awards. Clark also served as interim dean for the College of Engineering from May 2013 to July 2014. He has been a faculty member in the biological and agricultural engineering department since 1994 and served as department head from 2005 to 2009.

Clark is a licensed professional engineer, was recently inducted as a Fellow of ASABE, and has been an active ABET PEV (program evaluator) since 2010 with four program review visits. He has served on and chaired several ASABE technical committees including NRES 245 (Microirrigation); NRES 244 (Sprinkler Irrigation); EOPD 204 (Engineering and Technology Accreditation); the Operations committee of the ASABE Foundation Board of Trustees; was the Program Chair for the 1994 International Microirrigation Congress; and served as an active member and chair of the USDA Regional Research Project W-1128. Between 1982 and 2010, Clark was very active in ASABE and IA technical presentations as a speaker/session moderator.

Clark taught courses including introductory freshman courses; intermediate specialization courses on energy, irrigation systems, and water management; and senior level and graduate level design courses. He has also been recognized for teaching with several departmental awards, the College of Engineering Myers-Alford Memorial Teaching Award, and several campus and ASABE recognitions for extension publications and team activities. He was lead and co-author of 37 refereed journal articles, two book chapters, 71 meeting proceedings and technical publications, 36 extension publications and was invited to speak at many domestic and international workshops on irrigation system design and management.