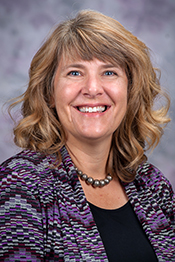 Upon completion of her doctoral degree, Stacy Hutchinson worked as an environmental engineer for the Ecosystem Research Division of the U.S. Environmental Protection Agency in Athens, Georgia. She returned to K-State as an assistant professor in biological and agricultural engineering in 2000, was promoted to associate professor in 2006 and full professor in 2014. During this time she served as interim director of the Urban Water Institute, 2013-2015; was a visiting professor at Ecole d’Ingénieurs Purpan, Toulouse, France, 2009–2010; and was a Fulbright Specialist at the National Mining University, Dnipro, Ukraine, 2016. Since 2019 she has served as associate dean for research and graduate programs in the Carl R. Ice College of Engineering.

Hutchinson’s research focuses on use of vegetated systems for mitigation of non-point source pollution, development of sustainable stormwater and land management techniques, and remediation of contaminated soil and water. She has received more than $4 million in research funding from various sources including the U.S. EPA, National Science Foundation, Department of Defense, Department of Energy and Department of Agriculture.

Major projects include an NSF-funded effort on climate change and mitigation that involved looking at past and future climate predictions to develop climate-change mitigation and adaptation strategies for Kansas with particular emphasis on the agricultural sector; extensive research at Fort Riley and four additional army installations funded by the DOD to develop sustainable land management strategies for military training lands; urban green infrastructure assessment funded by the Federal Highway Administration and the Nature Conservancy; and sustainable resource recovery and water management funded by local energy industry and the DOE.

Hutchinson truly enjoys working with students to generate new knowledge and transferring that knowledge onto the next generation of engineering professionals. She has published more than 30 peer reviewed articles and given numerous invited talks. She is an active member of the American Society of Agricultural and Biological Engineers (ASABE) and the American Ecological Engineering Society (AEES). She received recognition for her efforts in 2005 as the ASABE Kansas Section Young Member of the Year, in 2006 as the ASABE Mid-Central Section Young Member of the Year, and in 2009 when she was part of a Mission Integration Award from the Cooperative State Research, Education, and Extension Service. Additionally, she was named the ASABE Young Educator of the Year in 2007 and presented the Myers-Alford Memorial Teaching Award from Kansas State University in 2015. In 2016, she was a Fulbright Specialist at the National Mining University in Dnipro, Ukraine working to encourage the development of global solutions for water management. She enjoys international collaborations. In addition to her work with Ukraine, she also has strong collaborations with Ecole d’Ingénieurs Purpan, Toulouse, France, Jilin University, Changchun, China, and Three-Gorges University, Yichang, China.